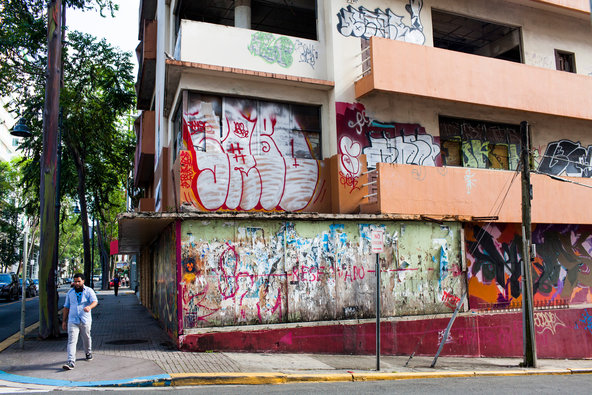 Here’s the first paragraph in this week’s New York Times story about  Puerto Rico’s manufactured debt crisis: “Standard & Poor’s downgraded the debt of Puerto Rico to junk status on Tuesday, intensifying a cash squeeze for the commonwealth, whose financial condition is of outsize importance to the rest of the United States because its debt is widely held by individual investors through mutual funds.” Granted, this is the “Deal Book” section of the Times, devoted to financial matters, but doesn’t it say something about how this story has been reported over the last months and years?

What this writer, and several others are saying is, “Let’s completely ignore the context of the US’s colonial relationship with Puerto Rico, an unincorporated territory, and announce the island’s economic crisis as newsworthy only because individual investors of mutual funds (who live in the US) are affected. It doesn’t matter at all that 4 million US citizens live there and are forced to endure said cash squeeze, as well as a rapidly deteriorating economy, widespread abandonment by those forced to find work in the US, an extraordinarily high violent crime rate because of the failure of the US-led War on Drugs.”

Nope, the reason this is a story is because it’s more doom and gloom for investors. Of course there are caveats, such as the acknowledgment in this particular story that “Some institutional holders of Puerto Rico’s debt have rules saying they cannot hold junk-rated debt, although those rules typically kick in after two such downgrades by the top rating agencies.” And today, in the Murdoch Business Journal, H.J. Sims & Co. analyst Dick Larkin brayed that he didn’t “give a damn” about the downgrade, calling it “schizophrenic” because “S&P raised Puerto Rico’s bond rating in 2011 when the country’s deficit was much larger than it is now.” Apparently Dick did not agree that S&P had “Found Their Cojones,” according to the assessment of Envision Capital Management’s Marilyn Cohen.

Apart from reducing the fate of Puerto Rico and its people to a hot and bothered discourse that ties financial high rolling to American sexual anxiety, can we step back a little and remember that S&P was one of those corrupt institutions that was an “essential cog” in the 2008 economic crisis (that is still plaguing America and the rest of the world)? It could be that the recent Puerto Rico downgrade was spurred by the fact that the US government is suing Standard & Poor’s for insisting that hundreds of billions of dollars’ worth of securities were safer than they turned out to be. Not surprisingly, S&P has claimed that this suit is in retaliation for their 2011 downgrade of the US’s credit rating.

So what do we have here? An invisible hand pressuring city, state, national, and territorial governments that have been abandoned by federal aid–or in the case of Greece and beyond, the IMF–into austerity policies to restore their credit worthiness. In Puerto Rico’s case, the attempts by the Commonwealth government to cut teachers pensions to get its “financial house in order” have resulted in a two-day strike and constant protest, and because of its dubious status as not an incorporated territory or state, or being a sovereign nation, it is rapidly being pushed into economic oblivion. Let’s not be mistaken about priorities here–working people making a living wage is a problem for global capital. Is it just a coincidence that Wall Street had an ecstatic rebound yesterday after a report that job growth continues to slide?

Puerto Rico is being made an example of, and the knee-jerk rhetoric paints it with the usual stereotypes: taxation avoidance by small business, lack of workforce participation, over-dependence on federal entitlements. But what choice have Puerto Ricans had in creating its economic destiny? The island “commonwealth” has had to accept the transformation of its economy from subsistence agriculture to a model of big agri-biz and exterior capital investment for large corporations and exploitation of an underpaid labor force that was a dry-run for NAFTA. A small middle class was briefly created but has become unsustainable because the tax breaks were revoked and Puerto Rican workers are too high-salaried for globalized capital, which went everywhere else but Puerto Rico after NAFTA. It’s not because we are lazy and we don’t pay taxes. It’s because we have no control over our economy or our relations with other countries.

Puerto Rico cannot ask for a bailout. It’s not only not too big to fail, no one knows where it is or why it has a relationship to the US outside of its failing mutual fund market. Even the tourists don’t know where they are when they go there. What Puerto Rico should do is bail out, on the US, and demand reparations. Talk of reparations over the years, rightly raised by African Americans and Native Americans, can seem fanciful, but the tide can change, and like skilled negotiators, Puerto Rico should start with high demands. Besides, it has morality on its side–we’re living in a world where the transparent goals of ruling money are becoming too obvious to ignore. Even Rolling Stone and Salon, bastions of liberal capitalism and for-profit counterculture, are suggesting that America’s rocky experiment in democracy and the free market is not all that exceptional, has devolved into a stateless high-stakes gambling casino, and its common sense operational logic no longer makes any sense.

Since statehood is clearly not the answer, and will never granted by a Congress obsessed with slashing government spending, and Puerto Rico does have a different language, a different culture, and more in common with Latin America–despite the fact that we have clearly mastered American consumer culture and are a bunch of bilingual world citizens–why not propose that Puerto Rico become gradually independent by negotiating reparations? These reparations, of course would be based on the grievance of second-class citizenship for over 100 years, massive profit extraction from the island by US corporations, who were not taxed in exchange for setting up shop on the island, and the seizure of land for the use of US military bases.

Of course this would entail the creation of an economic think tank that would formulate plans for new trade relations and economic development programs and policies, as well as a lengthy legal debate on how to handle citizenship issues for those who wish to retain US citizenship. But this way, Puerto Rico gets the nation status its people have long desired and defended, and the US gets to make a lump-sum payment over a negotiated period of time rather than continue with years of entitlement payments. And you know, what, how about an apology as well. For West Side Story and a whole bunch of other things, including illegally repressing the independence movement, racializing us, redlining us, objecting to us, condescending to us, marginalizing us, and after all that, gentrifying Spanish Harlem.

Unrealistic? Not if the left wing of the Democratic Party or a newly formed third party pushes to restore progressive taxation, the abandonment of which being the single biggest reason government revenues have shrunk, besides the absurdly calamitous wars in Iraq and Afghanistan, not government spending on social programs or the failure of the poor and working class to pay income taxes. The Republican Party has forced reductions in government spending on our ineffectual President, and we’re still in perpetual crisis, because there is no progressive taxation.

Okay, let’s say the Democrats are not going to be as affected by its emerging progressive wing, there is no third party, and there are no tax increases on the wealthiest, and Puerto Rico continues to deteriorate, and everyone just laughs off this idea of independence with reparations. As they say in the brave new world of tweeting and texting, hahahahahaha. Let me just ask the media, mainstream, business, or otherwise, one thing: Report this as a humanitarian crisis. Do not reduce my people to invisible, expendable people, living in a far-away land that has no importance until US mutual funds investors are threatened. Stop ignoring the fact that the US and its precious Constitution has found a way to hold a colony for 116 years and counting and not have to face any recrimination for it. Wake up. Smell the friggin Porto Rican coffee.

6 thoughts on “The Solution to Puerto Rico’s Economic Crisis”