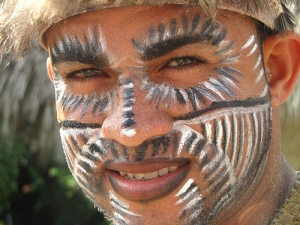 Some artists and academics in the U.S. want to revive the culture of Táinos, a people indigenous to the Caribbean, but not without controversy.

Caridad de la Luz, better known as “La Bruja,” is a fabulous Nuyorican poet and actress whose performances echoes an urban style cultivated in her ancestral homeland, the South Bronx. She has starred in her own Off-Broadway show, “Boogie Rican Boulevard,” appeared in Spike Lee’s “Bamboozled,” and recorded albums like “Brujalicious,” which fuses salsa, hip-hop and reggaetón.

But in some circles she is known as Kachianao, or “Sunflower of the Sacred Mountain” in what she considers to be her ancestral language, the language of the indigenous Taíno people of the Caribbean.

“I identify as Taíno, being of Puerto Rican ancestry. It is my most prominent root,” she said. “I have always identified with Borikén, the Taíno word for Puerto Rico, in a deeper way than simply identifying with our contemporary flag, food, and music. There is a much richer history that has not been given its due importance.”

La Bruja, who said her tribe is the Yamokuno Yukayeke, is like a growing number of people in the U.S. and the Caribbean, who are feeling the need to explore their indigenous selves.  They wear homemade regalia such as headdresses, naguas (loincloths), and participate in pow  wows sometimes with other Native Americans, or their own Taíno celebrations.

An annual awards ceremony called the Taíno Awards was co-founded by La Bruja and is held at the Nuyorican Poets Café and other locations.

“We agreed that creating an awards ceremony celebrating those who dedicate their lives to this would be a great way to empower, connect, and show the world that Taínos exist and are thriving,” she said.

And thriving they are. La Bruja’s story is not that startling when you consider that the official national culture of Puerto Rico is one that embraces the contributions of three groups: Spaniards, Africans, and the indigenous Taínos. But, there has been much debate over the years over the relative importance of each one. The indigenous and African roles in the Puerto Rican ideal have often been marginalized as passive and vestigial.

For instance, the 1905 Puerto Rican painting “El pan nuestro” by Ramón Frade depicts the idealized campesino, or “jíbaro,” as a benevolent light-skinned European-looking farmer. But many historians think otherwise, feeling that the mountain campesino of Puerto Rico was of mixed race. (Puerto Rico’s creole elite used the noble jíbaro image to symbolize a hard-working, close-to-the-land working person, to oppose attempts to Americanize the island. The U.S. gained control of the island seven years earlier as a result of the Spanish-American War.)

The common wisdom in Puerto Rico is that full-blooded Taínos were all but extinct by the early 17th century because of Spanish genocide, as well as exposure to European diseases.  But a 2011 book by University of Hawaii professor Anthony Castanha, “The Myth of Indigenous Caribbean Extinction” claims that Taíno culture remained basically intact in remote mountain areas, and formed the basis of the jíbaro culture.

Claims like these, as well as recent revelations derived from DNA studies, have fueled many Taíno groups to claim that they are legitimate descendants of Taíno tribe members, and that people who identify as Taíno are not merely exploring a part of themselves, they are legitimately reconnecting with their past. In the 2010 Census, as many as 35,000 respondents from Puerto Rico claimed to identify themselves as at least partially American Indian.

But academics such as Gabriel Haslip-Viera, who is of Puerto Rican descent and head of the sociology department at City College of New York, feel that the selective use of DNA testing by some Taíno revivalists is misleading.

“They tell you within the first 50 years [of Spanish rule] the Taínos are extinct. This is from the perspective of colonizers,” said Borrero, president of the United Confederation of Taíno People. “If we allow governments and academic institutions to tell us who we are supposed to be, we are losing the right to say, ‘This is who we are.’”

Borrero appears on the website LostTainoTribe.com in a trailer that promotes a new documentary about Taíno revivalism.

Haslip-Viera feels that groups like Borrero’s are angling to claim territories and tribal status, which he considers farcical since there is no continuity of history in their experience and claims.

“The Puerto Rican Neo-Taínos cannot point to anything like the broken treaties, the massacres, the forced migrations, the ‘Trail of Tears,’ Geronimo, Little Big Horn, Sitting Bull, and the reservation experience of North American Amerindians from the 16th to 20th centuries,” said Haslip-Viera who said “Neo- Taínos” are potentially a “politically divisive force.”

Still others studying the matter, such as Puerto Rico-based professor Jorge Duany have said that the indigenous movement has the effect of diminishing African culture in Puerto Rico, and some Afro-Latino activists feel that the focus on Taíno identity is done to avoid a more likely African identity.

In his essay “Making Indians Out of Blacks,” Duany says that Taíno revivalism “has contributed to the erasure of the ethnic and cultural practices of blacks in Puerto Rico.

“Sometimes I get criticized by people saying that I’m denying my African heritage,” said Bobby Gonzalez, a New York poet and storyteller who has been actively identifying as a Taíno since the 1990s. “But, I fully embrace the African in me. I’ve met with Lakota elders, Navajo, Pueblo and they accept me, but when I come home to the Bronx people say, yo, you’re Puerto Rican…That’s part of the colonial educational system.”

“I acknowledge that my Taíno ancestry is connected to Africa, because I believe that Africa is the original root of life,” said La Bruja. “There is no separation, and I take the time to practice and incorporate the African traditions that I have learned throughout my life as well,” she said. “I just do what feels natural to me as I channel and connect with my Taíno spirits.”