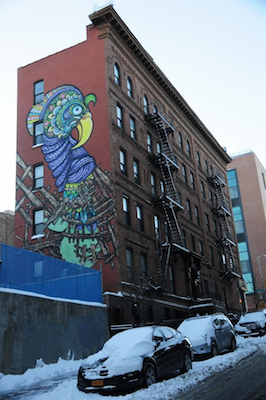 The worst thing about  today’s stories in  the Daily News and the Unmentionable Murdoch Propaganda Tabloid (I refuse to link to it, so find it for yourself) about “El Barrio Chickengate,” besides the fact that they are at times sloppily written and  racist, is that they are in danger of giving thoughtful criticism of the probable Speaker To Be, as well as our new mayor, the taint of right-wing lunacy. It’s even worse than that creepy feeling you get that when you consider that Obama packed his administration with revolving-door lobbyists like Eric Holder, and the best way to find quick info on this phenomena is looking at various right-wing nut job blogs. That said, it seems apparent that some sort of knives are desperately being sharpened to somehow sabotage the candidacy of City Councilwoman Melissa Mark-Viverito, which can be traced back to the Governor, borough machine politics, or both.

The Daily News stories are both obvious rehashes of articles written by Simone Weischelbaum that appeared during Mark-Viverito’s primary campaign in late August. The first one spoke about the councilwoman’s personal worth and the fact that she lives in housing intended for low- to moderate income people. This is an issue that still needs to be hashed out–was the councilwoman, at the time, a moderate income earner who wanted to plant roots in a community she had come to embrace, an island Puerto Rican who found common cause with Nuyoricans, or was she, as today’s Daily News editorial states, “applying for and winning ownership of a three-unit townhouse under a program meant for persons of limited income and assets,” knowing she was about to inherit substantial wealth following the death of her father in 1997?

Whether or not Mark-Viverito’s personal wealth is fragmentary–it appears the properties owned are divided among her family members–and $1.5 million is not all that much in a Jay Z/Barney’s world, there seem to be some issues of principle involved here. The fact that she is taking advantage of tax abatements is a common theme of what the councilwoman has pledged to fight–gentrification. One of the biggest problems surrounding that issue is the tax abatements homeowners, often wealthier than Mark-Viverito, receive in order to buy property in an “up and coming” neighborhood. All that lost tax revenue doesn’t help the public schools or other services, and in fact encourages the emergence of privately run charter schools, and the corporate takeover of education.

The other story, the voodoo-in-El Barrio horror tale that Weischelbaum wrote a few days after her original screed about the apartment, is re-told in amazingly insipid fashion today. Gwen Goodwin, who lost to Mark-Viverito in the Democratic primary last year (for the second or third time, don’t remember which) is suing Mark-Viverito for $1 million for commissioning a painting of a “decapitated chicken” on the side of her building. Her comment comparing it to a swastika or noose is outrageous–outside of Haiti, where voodoo is used against policial enemies, “brujería” is not used as an instrument of explicit race-based genocide, as lynching and Nazism were. Second, stigmatizing Caribbean people who may or may not use hybridized African-based religions is just racist, and in this case, misogynist.

Beside the fact that today’s article misidentifies the title of the mural as “Los Muros Hablan,” when that was the name given to the whole series of murals that were commissioned, the article ends with the irrelevant fact that  “former El Museo del Barrio executive director Melissa [? writer has Melissa on the brain] Margarita Aguilar gave the Mark-Viverito campaign a $100 contribution.” What does Aguilar, who was let go long ago, have to do with aiding or abetting a “curse” mural to be painted on the side of Goodwin’s building? So, even though Aguilar left bitterly and even filed a sexual discrimination lawsuit against El Museo, she somehow oversaw the funds Goodwin told the Daily News were funneled from Mark Viverito in order to create the death-threat mural? Is El Museo del Barrio a coven of witches, warlocks, shamans, and babalawos, who stick together to attack hardened leftists like Goodwin despite personal disputes?

Sloppy, sloppy, sloppy, Daily News. Takes credibility away from a pretty decently written opinion piece. But don’t even read the Murdoch Toilet Paper. It says that Santería is “based on Catholicism but includes voodoo-like ceremonies and animal sacrifices.” How could we expect them to understand a concept like syncretism, where African-based religions “hid” their deities behind Catholic saints while practicing their own religion, not “basing” it on Catholicism. I mean Jesus Christ is white, right? This is what Goodwin says at the end: “‘This intimated me and caused me fear. I’m a Christian. I don’t believe outside my religion, but strange things were happening,’ Goodwin claimed. She said that she suddenly got a blood clot in her foot and that a close friend began ‘acting crazy’ right after the mural went up.”

So, Goodwin is supposed to be to the left of Mark-Viverito but yet is not above fear-mongering about African religions and talking to the Murdoch Daily Crap. What are they putting in the water in El Barrio these days, anyway?

Final thoughts: It’s easy for those of us who have been paying rent for our whole lives here in the city that we grew up in and still love and have a right to stay in, to get a little irked about our profit-making friends. But let’s not be outraged, as the Daily News apparently is, that Councilwoman Mark-Viverito took part a little bit in the Occupy Wall Street protests–this is not hypocrisy, it’s having a conscience. It does help if people who are a little better off publicly state their outrage about the horrendous wealth inequality that seems to be a pet project of globalization and worship-the-rich popular culture. This is much healthier than Jay Z’s attitude for instance.

The real question is will Mark-Viverito, and our new mayor, turn out to be progressives or warmed-over neoliberals. So far on Bill’s end he seems to be straddling the fence–he’s a hybrid so far. The schools commissioner Fariña–seems like a good choice, someone who is not a corporate bureaucrat and might return some humanism and humanities to the curriculum. The police commissioner? The neoliberal project calls for controlling and marginalizing poor and working people of color, and despite Bratton’s window-dressing, what happened to ending Stop and Frisk? When is Stop and Frisk humane? And how about de Blasio’s choice for ringmaster of the inauguration ceremony–none other than Bill Clinton, Neoliberal in Chief, who signed NAFTA into law 20 years ago saying it was going to tear down walls, desperately trying to echo Reagan’s overrated success in getting the Berlin Wall to disintegrate years before. Clinton, who began the task of dismantling entitlements faster than you can say read my lips no new taxes. The man who kicked off the gentrification of Central Harlem.

The problem, for several years, has been the way the Wall Street and other international banks have taken over how the city is financed. The debt structure is so entwined you can’t honestly say we’re being governed by a municipal body. I guess we’re hoping that Bill de B might really mean it with his “no-tie” personality, his Sandinista roots, and his edgier-than-Cosby family. Let’s hope so, because if not, he’s just going to go down as the mayor who spoke a little bit better Spanish than Bloombito. I guess he might just have some witchcraft up his sleeve.