Made it over to the last day of viewing for Kara Walker’s “A Subtlety,” the now-famous (or infamous) installation at the Domino Sugar Factory in Williamsburg, Brooklyn. The night before I overheard a heated discussion about it at the Blitz the Ambassador show at the Brooklyn Museum, and of course, it had been a buzz of extreme proportions since it opened in May. Turned out that the last day, July 6, was a picture-perfect summer day, so I hopped on the 10-speed, shimmied my way down the rutted East River Drive bikeway, made a left at Delancey and joined the massive line to get in.

The massive line to get in was, of course, an unavoidable theme when you speak with people about the installation, inspiring a friend (who of course had already seen it) to send a text that said “You tell me whether it was worth the wait.” So many first-rate art, music, and, yes, food events in New York require interminable waits, so it becomes part of the suffering that one does in this town, and in that sense becomes inseparable from the anticipated pleasure. Then of course there was the issue of Williamsburg, and it’s accompanying gentrification, hipsters, and the inescapable feeling that just yesterday, there were lots of people in funny shorts and hats in a beer garden somewhere nearby introspectively engaged in the World Cup quarterfinals.

The gentrifying hipster meme seemed perfectly in context with the installation, and the unsettling criticism of her work, and message. The tendency toward shock and the controversial in art has been bubbling up since the dawn of performance art (Chris Burden, Ana Mendieta), then kind of stylized by 90s provocateurs like Damien Hirst. Yet Walker, who started being noticed through her silhouette studies and their references to slavery and the antebellum south, a milieu since gone mainstream with films like Django Unchained and 12 Years a Slave, seems to have harnessed a power and sense of dignity that at least partially refute the criticism. Sure, it was vaguely uncomfortable seeing the silhouette prints for the first time hanging on the walls of a Park Slope brownstone back in the mid-2000s–it was like listening to hiphop in an Ivy League library. But the pictures popped with tension. 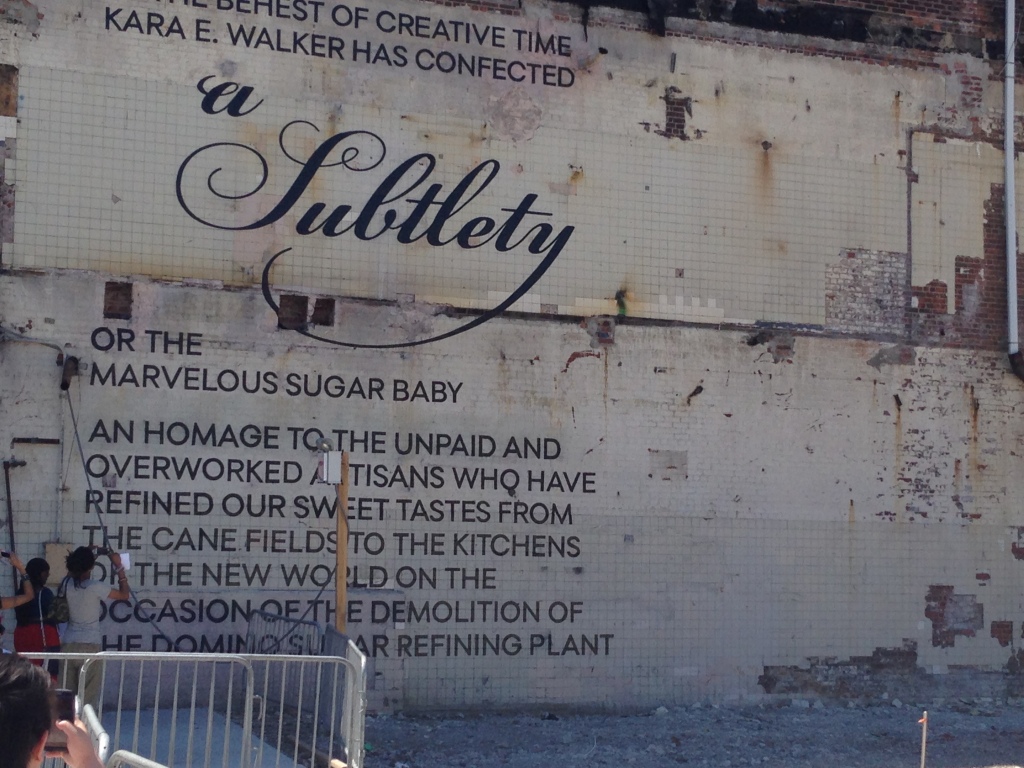 It’s just that the art world is all screwed up, which I’m sure is not news to you. The viewer, who goes to galleries or museums, is usually not the consumer, who drops major dimes on the work and often doesn’t grasp its significance. I’m no art critic–for various reasons–but I can tell you the whole scene is made for people who fantasize about interactions between cultures they designate as High and Low, with little regard for what comes in-between. All that said, as I entered the space that housed “A Subtlety,” I was glad that I’d waited until the last day.

That’s because the first thing that got me as I walked in was the smell. The overused phrase, “sickly sweet” had never had so much resonance for me. As so much of the press coverage has noted, the exhibition was constructed from sugar and molasses, and the New York City summer had been slowly turning it into caramelo. The smell was comforting and uncomfortable, safe and dangerous. It was the perfect metaphor for sugar–pleasing, seductive, but in the end, rot-inducing. Disposable commodity consumption summed up in one of life’s basic organic processes.

“A Subtlety” not only surrounds you with stark reminders of where we are in this age of post-late-capitalism, it marks the passage of time, bringing us up to date. We are sinking into the stinking sweet waves of what to do after we’ve completely devalued human labor and agricultural commodities. We are only left with nostalgic images of the full flower of modernism: the triumph of the leisure class on the backs of the exploited. Yet there is one body reigning supreme here and it is not scarred, its face not drawn in anguish. It is huge, sensual, and white as snow.

Sugar Baby, we can’t hope to reach far enough to caress your face. We cannot engage in a conversation. We can only see you staring straight ahead and not giving us the time of day.

Perhaps some of those in attendance had at least heard he buzz about this piece in the Indypendent. The pudenda was present, unflinching, but there was not much laughter or posing. There were poets declaiming, and many of the observers were people of color, curious, silent.

The piles of crumbling, melting sugar surrounded the base of the statue. If I was upset it was because there wasn’t much reaction to the sadness of it all. The smell and the spectacle had apparently overwhelmed everyone. Here we were in a rotting building that would soon be made over–like so many rotting buildings that were home to people like me–into stainless steel kitchens and waterfront views. It was hard to tell how much we knew we were dangerously close to embracing the culture that we’re now living in, the glossy smile of un-real estate and entrepreneurial tech: the culture of decay.

Till next time, Williamsburg.

2 thoughts on “Kara Walker and the Culture of Decay”