For all of you interested in independent film and Latino subject matter, I’m suggesting you check out Babygirl, which has its world premiere next Thursday, April 19th as part of the Tribeca Film Festival. I served as Musical Director for the film and helped out in other areas. The film’s main characters are New York Puerto Ricans, and I’m hoping it succeeds as one that presents this community in a positive light. Of course, I’m not sure everyone will agree, but that’s why I’m hoping you see the film and consider its worth. And of course whether or not it’s a good “movie.”
Babygirl features the debut performance of a local New York teenager as well as the world famous poet and salsero Flaco Navaja. It has a fairly edgy plot that manages to remain sentimental, trying to balance the joy and pain of single-motherhood and the wisdom of youth suddenly confronted with adulthood.
The page for the film is here: http://www.tribecafilm.com/filmguide/babygirl-film42163.html#.T4YZXO3fZhM
There will be three screenings, April 19 at 9 PM, Saturday April 21st at noon, and Friday April 27th at 9PM. The first two screenings will be at the AMC Loews Village 7 and the last at Clearview Cinemas Chelsea. If you can’t make it, the film has been chosen as part of this new feature of the festival where they will stream it online, and it will be available to view 24/7 until the end of the festival on April 29th.
The after-party at Nuyorican Poets Café was fabulicious, as Flaco and his Razor Blade Trio entertained us with his now legendary Lavoe channeling-meets-Nuyo-Spanglish rhyming thing. Here are photos from the Red Carpet: 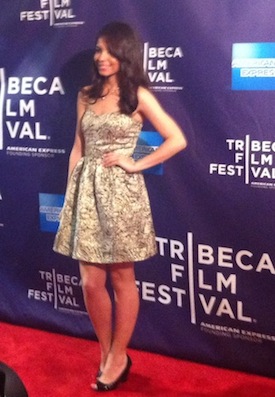 This just in, check out this nice interview with video of Flaco Navaja commenting on the film and Nuyorican identity in general. What’s good, Flaco?