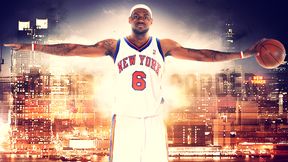 This past Sunday, Newsday employees voted to ratify a contract that would lower their salaries by 5% and 10% beginning next week, July 6. This is patently outrageous because Cablevision, the parent company of the Long Island daily, has reported a tripling of its profits a month ago. The huge profits seem to have resulted directly from Cablevision’s “spinning off” of MSG and its New York entertainment empire (Beacon Theater, etc.) in a move to increase dividends to its shareholders.

On the surface, this “spin off” might temper any outrage by Newsday employees about the New York Knicks’ (owned by MSG) pursuit of Lebron James and other high-priced free agents. But this seeming separation of the business of basketball from the business of cable monopoly is only on paper: James Dolan, CEO of the Knicks, remains CEO of Cablevision. Hank J. Ratner, CEO of MSG, is vice-chairman of Cablevision. So in effect, the heads of the corporations that own Newsday, and have had their accountants cook up phantom depreciation expenses to their books to make it appear that Newsday is deeply in the red, are part of a team that is actively pursuing basketball superstar Lebron James and anyone else willing to work for $15-20 million a year while cutting Newsday employees’ salaries.

Unsurprisingly, New York Mayor Michael Bloomberg, who can’t even keep as many people of color as high-ranking employees as the race-challenged Giuliani administration, is leading the charge to support the Knicks, Cablevision, and MSG. It’s good for business, just like forcing employees to take a pay cut as profits soar.

Well, I guess that it’s all good. Why should anyone complain about salary cuts as long as the Knicks make the playoffs?  After all, we have the right, unlike Lebron, to become free agents every day for the rest of our lives.

One thought on “Newsday, Cablevision, and Lebron”