There was an appropriate air of excitement at Bogotá’s Teatro Jorge Eliécer Gaitán on a recent September evening. A buzzing crowd had come to hear a broad array of musical acts native to this capital city, a magnet for internal migration, and celebrate its designation as Creative City of Music by UNESCO, announced last May. They had just feasted on the rap-fusion energy of vocalist Midras Queen, who was followed by a classical choir dressed in red and black, singing a porro, a folkloric style from Colombia’s pacific coast.

Clarisa Ruiz Correal, the Secretary of Culture, Recreation and Sports, took the stage and tried to make sense out of Colombia’s diversity of culture and music. “Our musical syncretization has brought warmth to this gray and solemn city, an upland plateau,” she said. “Bogotá has become tropicalized. The map of the city is tattooed with a pentagram of sonorous circuits that range from jazz and salsa to mariachis, reggaetón and hip-hop, to chirimías [a coastal music] and rock.”

Bogotá has been a symbol of the country’s long struggle and desire to project itself as a multicultural nation, a mandate that stretches as far back as the acceptance of composer Lucho Bermúdez‘s adaptation of Afrocentric coastal rhythms in the early 1950s, to the protection of ethnic diversity explicitly stated in its 1991 constitution. Musicians from the northern coast cities of Cartagena and Barranquilla, or Valledupar the home of vallenato, as well as interior Andean and the llanos plains that border Venezuela, have long gravitated to Bogotá.

More recently, the seemingly unending civil war has had an unfortunate side effect: thousands of Afro-Colombians from the coastal area of Chocó have been displaced and forced to migrate to larger cities, helping to create an emerging hip-hop culture in Bogotá’s barrios, led by groups like this year’s Latin Grammy nominees ChocQuibTown.

But now, efforts spearheaded by the office of the recently elected mayor, Gustavo Petro, the city’s Chamber of Commerce, and an affiliated agency called Invest in Bogotá, have resulted in the recent designation of the city by UNESCO as a Creative City of Music, and following a basic strategy of globalization, the city is trying to capitalize on this moment to attract tourism and investment.

In early September, a series of meetings were held with representatives of sister Creative Cities of Music, Bologna, Italy, Gent, Belgium, Sevilla, Spain, and Glasgow, Scotland to compare notes and strategize future events.

One of the centerpieces of Bogotá’s efforts to establish itself as a creative city of music is the annual Bogotá Music Market, to be held on October 16 and 17. Designed for networking and allowing musicians to adapt to the world of social networking, publishing, and licensing, the fair hopes to attract participants not only from Colombia, but different countries in Latin America. While the purpose of the market is on the one hand helping musicians make corporate alliances, it can also serve as a way for the most folkloric musician to make his/her digital footprint on an increasingly globalized music market.

Over the weekend of September 6-9, visitors were introduced to representatives of various cultural organizations, such as Fundación Batuta, the culture-supporting National Bank, and musical producers like Iván Benavides, who pioneered recording folkloric groups like Los Gaiteros de San Jacinto (who appeared at the 2007 Latin Grammy Awards with Calle 13). The meetings also coincided with the outdoor festival Jazz al Parque, one of several festivals that feature genres like rock, hip-hop, salsa, and Colombian (varied local genres) in free concerts in parks around the city. The final concert featured renowned saxophonist Joe Lovano and experimental fusion band Screaming Headless Torsos. 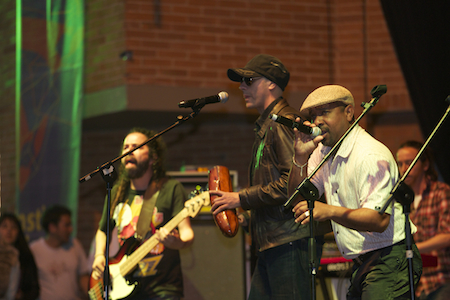 Undoubtedly Bogotá made a strong case for itself as being an emerging capital of music, especially in Latin America. The night I arrived there was a packed show featuring electro-cumbia indie giants Bomba Estereo, who were releasing their new album, Elegancia Tropical, reinforcing the one-nation-under-a-tropical-groove agenda. The show at Jorge Eliécer Gaitán theater finished strong with the increasingly trendy rock-influenced salsa band La 33, and the impressive cumbia fusionists Onda Trópica, founded by electro-cumbia standout Mario Galeano Toro.

That same weekend in September, representatives of the mayor’s office and the four sister cities found themselves in the middle of the raucous, celebratory scene taking place nightly at the Gaira Café. Painstakingly designed to create the feel of the Valledupar tropics, the club has the trappings of a vallenato-based Hard Rock Café. But in between intense DJ sets where everything is played from La 33 to Oakland’s Panamanian hip-hoppers Los Rakas, there are spontaneous performances by vallenato vocalists, often joined by a bizarrely dressed entourage, creating an almost cabaret feel. The invited Europeans, finally getting their feet on the ground of this ultra-elevated city (8,612 feet closer to heaven, as it were), joined the surging dancers.

As part of the jazz festival, happening concurrently, there was a stirring performance by Dominican pianist Michel Camilo, accompanied by the legendary Puerto Rican percussionist Giovanni Hidalgo. Camilo addressed the crowd with his typical warmth, which was reciprocated as the crowd was dazzled by the interplay between Camilo’s rough percussive playing and Hidalgo’s wide-angled subtlety—it was as if he were masking that he was playing six congas at once. Just as earlier in the day, when there was an outdoor heavy metal concert downtown, Bogotanos proved again that their tastes were not limited to salsa, cumbia and vallenato.

Perhaps the highlight of the weekend was the performance of Big Band Bogotá, which performed music from the American jazz canon, but also an original piece by New York-based Colombian percussionist Samuel Torres, and a tribute to Lucho Bermúdez. While the band’s performance was a surprisingly exciting reinvigoration of the big band jazz, format, the way it captured the nostalgic lament of Colombian folkloric music gave it emotional force. I can’t wait to see this band astound hipsters and jazzophiles alike at a venue like New York’s Central Park Summerstage.

The Big Band Bogotá show was held at the spanking-new Teatro Mayor at the Julio Mario Santo Domingo Public Library Cultural Center in the northernmost quadrant of the city. The library, bustling with children and young adults, had an impromptu visitor that day, hip-hop MC Diana Avella, who brought her young son. Avella, who has been rapping for 12 years, is part of El Colectivo Distrital de Mujeres Hip Hoppers, a collective that functions as a support group as well as a workshop for hip-hop practices such as breakdancing, DJ’ing and graffiti writing.

“Bogotá is a city that receives daily people from all over the country,” she said. “They come here bringing their beliefs, customs, and of course their music. I am a proud Bogotana, and I have seen how the city prepares itself in a better way to appreciate diversity and culture. I live in a city where in educational institutions and different stages I can sing my rap compositions freely without any kind of exclusion.”

The theme of inclusion was one often heard in my conversations with city officials, urban planners, marketers, and non-profit organizations. Some of those I encountered were diehard Bogotanos who happened to have Taiwanese or gitana ancestry, all speaking that proper Colombian Spanish, proud of their city and country. Aterciopelados singer Andrea Echeverri played a show while I was there in support of peace in the Cauca Valley, and sent me the lyrics to her song, “Minguera.”

Whether or not this initiative helps Colombia establish itself as a capital of Latin American music, or heal a country seemingly trapped in an endless civil war (this just in—the government is negotiating with the guerrillas, again), there is strong proof that the desire is there to come together.

And music often gets the job done.

One thought on “Bogotá Reinvents Itself Through La Música”