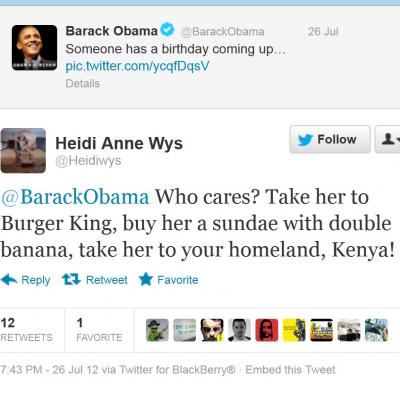 As huracán season approaches, the political and social climate in Puerto Rico continue to deteriorate, making it increasingly urgent that the current regime of the misnamed New Progressive Party (PNP) be dismantled in the fall elections. Consider this tweet, featured in the current edition of Noticel. In mangled English, sent out by Heidi Anne Wys, a political consultant to the president of the PNP-controlled Puerto Rico House of Representatives, Jennifer González, suggests not only that Obama was born in Kenya, but that he should be associated with not one, but two bananas. Talk about double consciousness.

This is on the heels of another racist tweet three months ago posted by González’s “mentor” Zaida Hernández, comparing an Afro-Puerto Rican candidate from the PPD to a monkey. Unfortunately these incidents can be regarded as unsurprising, a natural result of the hard-right repressive atmosphere created by the Luis Fortuño administration. The exposure of this administration’s escalating use of repressive police powers has engendered a political crisis which they have responded to by lobbying for increased US government funding for an expansion of the drug war into Puerto Rico, and a renewed focus on punitive measures towards convicted felons.

The first initiative, although not fully realized yet, has already offered up a grim preview of what could happen should Puerto Rico use increase federal involvement in counter-narcotics measures. A shootout in a shopping mall in suburban Guaynabo involved officers from ICE and DEA placed civilians in danger. Of course, Governor Fortuño expressed his concern, but it was directed more at what he saw was the problem of criminal activity, not placing possible collateral damage in a position of high priority. Today, the governor signed into law a new penal code, that along with increasing sentences for homicide, kidnaping, crimes involving sexual aggression and child pornography, also threatens those that engage in civil disobedience with a sentence of up to 3 years. Not only does this mean that many of the students and workers who engaged in such forms of protest in the last two years could have been menaced with harsh sentences, it means that everything that was achieved by the protests against the US Navy’s presence in Vieques in the 1990s may not have been accomplished under this new code.

The message here is clear: some of the worst civil rights violations committed by police during the period of protests after Fortuño took office in 2009 occurred in response to citizens using civil disobedience tactics. Since the government, despite supposed pressure from the US DOJ to reform, has no intention of remedying the situation, they are trying to dissuade citizens from protesting in the first place, lest their actions be interpreted as civil disobedience, even if just engaged in a peaceful march. It’s just another form of the chilling effect on the rights of citizens to protest, replacing the baton and the pepper spray with draconian stretches in what will undoubtedly be the island’s expanding prison system.

One thought on “Chaos in the Colony pt 6”