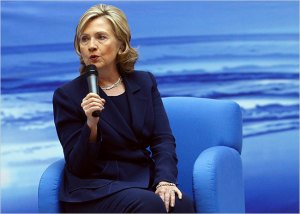 Today’s pronouncements from Qatar seem to confirm what’s been bubbling under the surface for several months now. With the filibuster game even more complicated by nude model Scott Brown’s election to the U.S. Senate–his vote seemingly ensuring no meaningful Congressional action on health care and jobs, as if there were any bipartisan hope to begin with–the Obama administration is giving in to Roger Ailes, and News Corp, and the defense contracting lobby’s deadly agenda.

You remember that seemingly innocuous confrontation between Ailes and the Huffington Post’s Arianna Huffington a couple of weeks ago on ABC News’s This Week Sunday morning talk show? While the fracas mainly focused on Ailes’s deceitful defense of Glenn Beck, his comment on the importance of attending to our national economic disaster was far more chilling:

Ailes: Jobs is the second issue in my view.

Ailes: Safety and sovereignty of the United States. And I think people, when they see a guy get all the way over to Detroit, too dumb to blow up his underpants, but he could’ve, and now we’re in a situation we’re going to have to–we took everybody’s shoes off, now we’re going to have to take everybody’s underpants off, but the fact is that’s not going to stop it. We’ve got to get much tougher; we’ve cut the hands off the CIA, it’s not the Norwegians that are doing this, we know who it is, we can’t seem to say it, so sooner or later we’re going to toughen up on all this stuff.

And let’s not forget the Palin comments during last week’s interview with Farce News’s Chris Wallace:

Wallace: I know that three years is an eternity in politics. But how hard do you think President Obama will be to defeat in 2012?

Palin: It depends on a few things. Say he played, and I got this from Buchanan, reading one of his columns the other day. Say he played the war card. Say he decided to declare war on Iran, or decided to really come out and do whatever he could to support Israel, which I would like him to do. But that changes the dynamics in what we can assume is going to happen between now and three years. Because I think if the election were today, I do not think Obama would be re-elected.

Wallace: You’re not suggesting that he would cynically play the war card.

Palin: I’m not suggesting that. I’m saying, if he did, things would dramatically change if he decided to toughen up and do all that he can to secure our nation and our allies. I think people would perhaps shift their thinking a little bit and decide, well, maybe he’s tougher than we think he is today. And there wouldn’t be as much passion to make sure that he doesn’t serve another four years…

So today we have the Secretary of State asserting the increasing threat from Iran, in these words:

“We see that the government in Iran, the supreme leader, the president, the Parliament, is being supplanted and that Iran is moving towards a military dictatorship.”

So, for now, there’s nothing more than the saber-rattling:

“Pressed repeatedly by an audience of mainly Muslim students, Mrs. Clinton said the United States had no plans to carry out a military strike against Iran.”

Let us all be forewarned: This is an election year. And no matter how many of us lose our jobs, go broke in the hospital, and just plain give up on making it in this country, the Democrats may decide that only war, or the threat of war, really wins at the ballot box.