I remember Clyde and Pearl and Dr. J, but I can never remember a time when both the Knicks and the Nets were competitive at the same time. After emerging from the “dark” years of the Isiah Thomas era (which included both racial and sexual controversy), the Knicks have finally re-tooled into a semi-contender. Ambivalent as I was about the corporate takeover trade between New York and Denver (I liked the smaller, faster players), it seemed right that Melo and LaLa would plant their behinds on 33rd and 7th. Don’t sleep on Chauncey either.
In the subplot starring the Russian racketeer and Jay Z, the Nets have stolen away the Knicks’ future dream point guard, Deron Williams, from Utah. Instead of feeling envious or resentful, it dawned on me that when the Nets move into Brooklyn in 2012, there could be a great intra-city rivalry between the two teams with possible playoff matches that would entail riding the 2,3 from Penn Station to Atlantic Avenue and back. Feels like Yankees-Polo or -Ebbets.
But–could it be–the world economic system and the crisis of neoliberalism make it difficult for me to enjoy this moment. How can I think of the Knicks without thinking of James Dolan, CEO of MSG and Newsday, a union-buster who forced a 5% pay cut on my household and eliminated my weekly column from the Sunday Fanfare section? And how could I forget that it was Bruce Ratner’s misguided and decadent Atlantic Yards development project that set off a wave of real estate speculation that  at least indirectly prompted my landlord to sell the Brooklyn home I was living in to someone who insisted on raising my rent by $1000 a month, forcing me to eventually move against my will?
I shouldn’t take these things so personally and just enjoy the games, I guess. 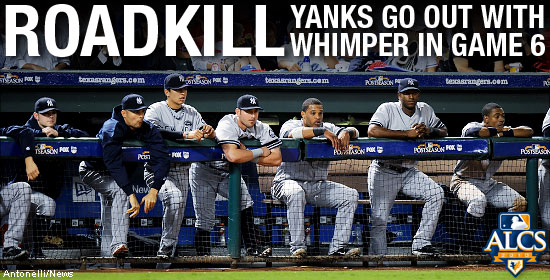 The Yankees, who have won 27 World Championships, have won 1 in the last 10 years. Here’s a highlight from a recent losing season: