When comedic actress Yeka Rosales physically transformed into Yalitza Aparicio, the Oscar-nominated star of “Roma,” to promote her show on the Mexican network Televisa, she gave us a glimpse into one of Latin America’s best-kept secrets: a deep and abiding racism. In images she posted on Instagram last month, Rosales donned a wig of straight black hair and a prosthetic nose along with brown facial cream, engaging in a long-standing tradition of black- and brownface in entertainment.

For those of us of Latin American descent, this kind of outrageous behavior can be shocking, given our own encounters with racist taunts such as “build the wall,” “beaner” and other offensive terms in our neighborhoods and on social media. But through Rosales’s cringe-inducing mimicry of African and indigenous people, we can see the roots of our own racism in the way Latin America’s white-identified elite define themselves through exclusion while seeking to connect with the cultures they try to keep out.

The spectacle of Rosales’s “satire” on the show “La Parodia” was nothing short of grotesque, performing an ignorant, awkward and silly stereotype often assigned to indigenous people. Brownface parody is a long-running element of Mexican entertainment, including the character named La India María from the 1972 film “Tonta, Tonta, Pero No Tanto” (“Stupid, Stupid, But Not That Much”). But the practice — and the racism that underlies it — has persisted. Last month, Mexican actor Sergio Goyri made pejorative comments about Aparicio, calling her unfit for an Oscar nomination.

While Goyri recorded a video apology soon after his comments, Rosales has doubled down on her performance. She posted a Simpsons-like cartoon depicting various shades of a thick-lipped, straight-haired version of Aparicio’s character, Cleo, with text asking “Then what skin color should I have used to portray Yalitza and not offend you?” She included a collage of photos of herself as Frida Kahlo, Celia Cruz and Donna Summer, questioning why no one had objected previously to her equal-opportunity racism.

Rosales has laid bare a Latin American racism that has had a level of impunity unimpeded by U.S. “political correctness.” Mexico and other Latin American countries live in a myth of racial equality: Because there are so many mixed-race “mestizos,” they believe that racism does not exist. In reality, indigenous people are largely marginalized, and Afro-descendant Mexicans were not even counted in the census until 2015.

So it’s not surprising that black- and brownface pops up on TV shows in countries such as Peru and Colombia. Even in Miami, you can find a character like Yeyo Vargas, an Afro-Dominican played by Carlos Marrero, a white Cuban American actor. Vargas, who is described as president of the fictional ULPO (Latino Union Party) and Barack Obama’s “adviser of Latin American and Caribbean affairs,” was ripe for ridicule in a South Florida milieu dominated by Republican Cuban Americans. Yet according to Latino scholars Ariana Hernández-Reguant and Jossianna Arroyo, who wrote about Vargas for their online magazine Cuba Counterpoints, this particular burlesque is more than mockery; it shows how white Cuban Americans are “racially estranged” from the politically progressive identity of “brown Latinidad,” an emerging constituency in greater Miami. 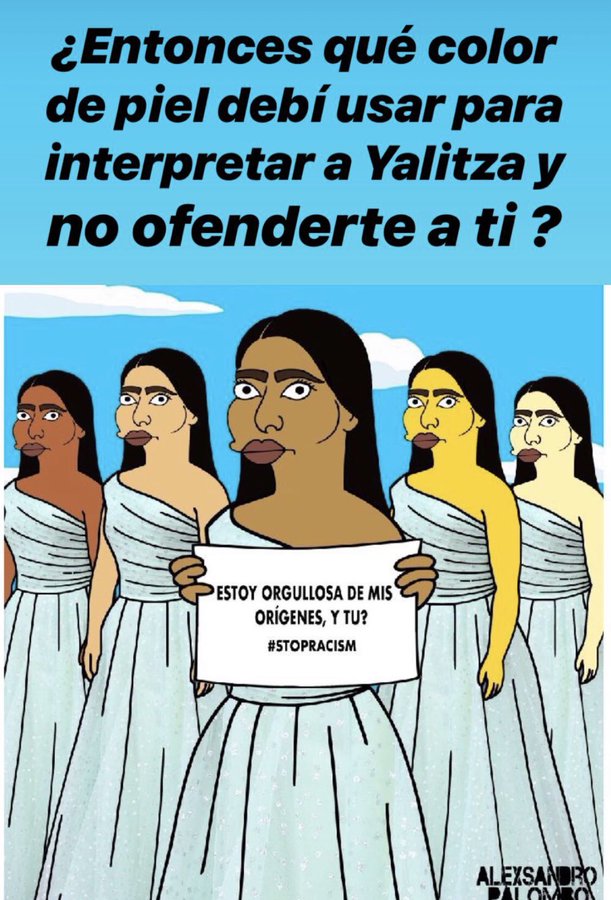 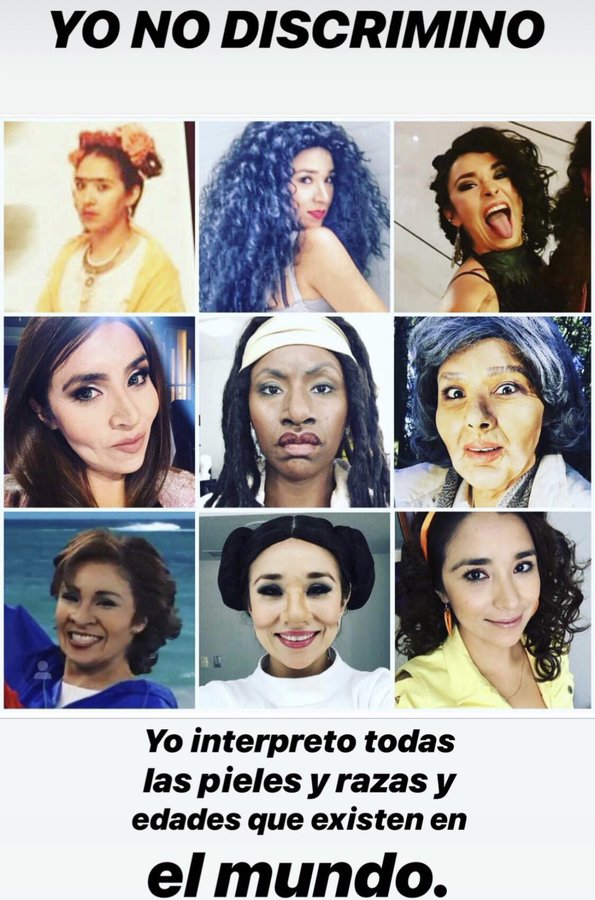 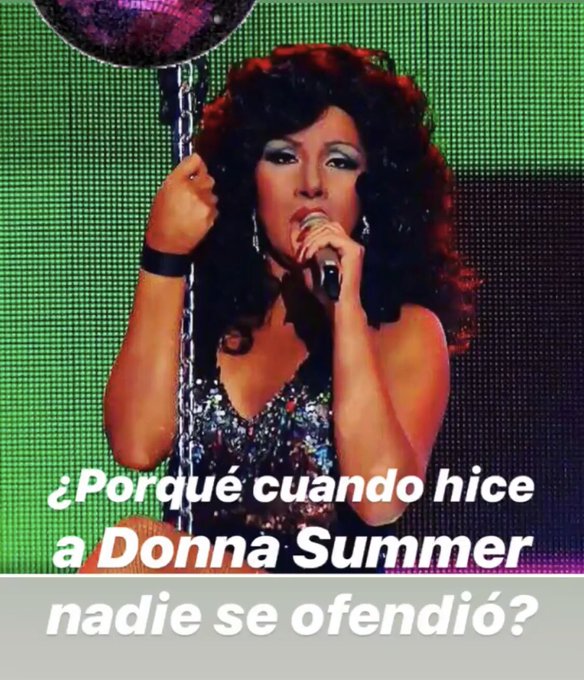 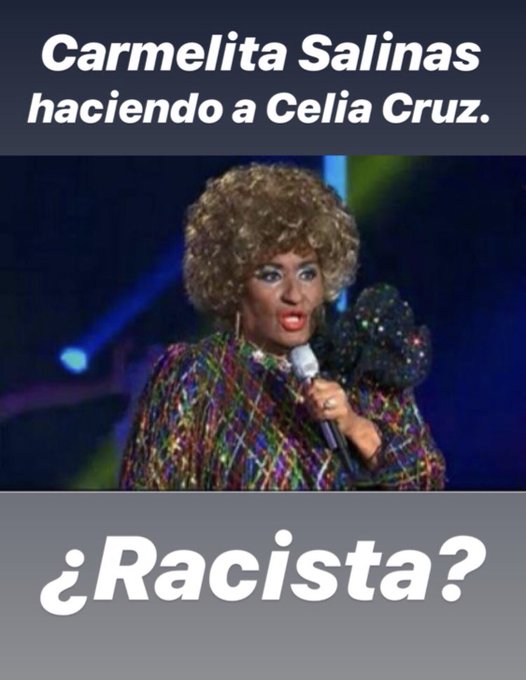 This new wave of Latin American black- and brownface might be a reaction to the racial animus exploding in the United States, where barely a day goes by when we don’t see a new story about rampant racial offenses, whether it’s the blackface photo on the Virginia governor’s yearbook page, college students in black- and brownface at fraternity parties or California partyers playing drinking games with plastic cups in the shape of a swastika. Blackface is undoubtedly a kind of twisted form of desire, as George Yancy muses, that satisfies a need to “feed” on difference. This bizarre compulsion for racial impersonation allows people to turn social class roles upside-down during carnival season in Cartagena, Colombia, and even formed part of the basis for the white appropriation of tango music, which was originally part of black culture in Argentina.

Racial impersonation goes way back in both U.S. and Latin American history as a way for European migrants trying to “own” the land they had conquered and form a new identity. When Colonial rebels in New England dressed up as Native Americans during the Boston Tea Party, they weren’t only trying to fool the British; they were trying to stake a moral claim to the land they were living in, one whose authenticity could be provided only by Native Americans. In 19th-century Puerto Rico, the elite landowning Creoles, or Latin American-born men of Spanish descent, wrote tracts criticizing Spanish colonizers in the “unsophisticated” language of mountain peasants called jíbaros, in part claiming the traditions of indigenous Tainos who had largely been wiped out by disease.

The nasty, condescending derision directed against Aparicio’s Cleo resonated deeply on social media, where old racist ideas about her alleged lack of attractiveness and unworthiness to represent Mexico were revived with shocking quickness. But they’re also a reminder of the many overt and subtle ways we Latinx in the United States mock and discriminate against blackness and indigenousness in our own families. At its most extreme this tendency shows up in the smattering of Latinx faces at President Trump’s rallies or even in white supremacist groups, such as the Puerto Rican man accused of assault during the disturbances at Charlottesville. In the end, Rosales’s thoughtless “parody” couldn’t take away the dignity of Aparicio, who graced the cover of Mexican Vogue magazine as if it were her birthright and showed that her role in recognizing that indigenous people were a central part of Mexican identity was crucial in this time of regression in race relations. She is part of a long-denied assertion of dignity for indigenous people in Latin America, during a time when Afro-Latinx awareness is also on the rise.

Black- and brownface have long been a constant, if at times unacknowledged, scourge since the colonization of the Americas. What seems like a recent revival is an uncomfortable example of how people of color remind white people of what they’re not, which results in their degrading use as objects of cultural envy. The Aparicio episode should remind us that there’s a lot of work to do to combat racism on both sides of the border.