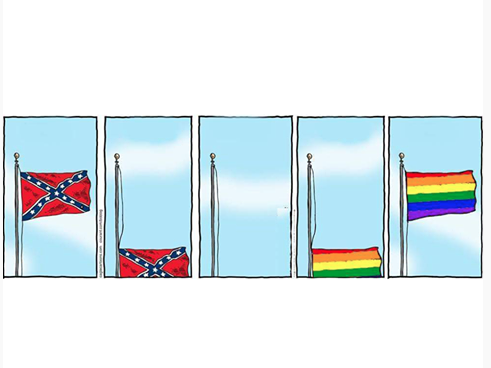 It’s a beautiful day. Supreme Court decisions that grant humanity to the LGBT, affirming the idea of a “living Constitution” ; the taking down of Confederate flags around the South. Obama singing “Amazing Grace“; and earlier this week, Obamacare also upheld by the Supremes. But let’s keep it in perspective. It was Justice Kennedy, who despite finding that some freedoms might be seen clearly in “future generations” (this is weird, so this means back in the 18th and 19th century, America just couldn’t “see clearly” that slavery was not freedom?) who was a chief architect of the Citizens United ruling.

And let’s not forget that we’re still far away from immigration reform, and Obama will only go so far when it comes to LGBT advocates who are also undocumented. And let’s not forget what the Federally imprisoned Chelsea Manning thinks about what today’s ruling means.

And celebrating the almost stealth passage of TPP this week as Obama’s ability to work “across the aisle” with Republicans is a joke.

Meanwhile, check out my appearance on the “Latino Collective” show on Pacifica’s Washington, DC outlet, hosted by Oscar Fernández. We spend an hour talking about how it’s not getting any better for Puerto Rico, either.