On Saturday night, the masses descended on the corner of Cortland Avenue and 151st Street, because in the end, all of the Nuyorican nation (and honorary Nuyorican isleños) eventually comes home, this time to the Bronx, others to El Barrio or Loisaida or Los Sures, to spend some time with familia. There was lots of familia in the house to see the work of six photographers who captured some of our core communities’ shining moments during a time when so many had, to paraphrase David Gonzalez’s address to the throng, turned their backs or moved away from one of the last bursts of creative urban activity in our country’s history. 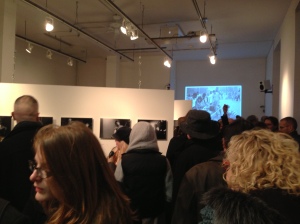 It was one of those openings, hinting at the throbbing human energy of years past at Fashion Moda, the Times Square Show, ABC No Rio, CHARAS, etc, even that monumental ’92 Basquiat retrospective at the Whitney and the subsequent Biennial of ’93 when Guillermo Gómez Peña and Coco Fusco showed up in a cage smirking at everyone who stopped to stare. This means that it was tough to really focus on the work, although the feel of the room was permeated with it.

Just arriving on the scene, Mike Kamber’s BDC, was stunning–the crowd was overflowing into the street, some recapturing ancient memories, others being given a window to a mythical time of arson and rubble and rhyming and breaking and tagging walls, a different kind of tagging, the anonymous play at fame, a nickname and the street you lived on, the forerunners of aol addresses at the dawn of the internet age. Photographers are the best vehicle for this kind of access, their function literally being to let in the light of the moment, less of a freezing of the action than an attempt to capture the memory of motion, of the practical activity of identity.

So here on this corner of the long-neglected Bronx and its rumors of comeback, of real-time reconstruction involving community, collectivity and arts integration rather than art invasion, there was a dream to be had. It was a rice and beans dream washed down with Brooklyn Lager, a roar of surprise recognizing hip hop heads and dreads and PhD cred that flowed through the street views that had come inside–the ones Google will never preside over.

There were so many people there that you missed people that only later you are informed had come out. You catch a glimpse of Henry Chalfant, director of Flying Cut Sleeves and From Mambo to Hiphop, completely miss Bobbito García, latch onto to Angel Franco, who gave you one of the most profound and kickass funny days of City Section journalism ever. There was David and Arlene and Rafa and Monxo and Libertad and their baby and Michael and Calixto and one of your students and people who recognized you and said shit to you and people who didn’t recognize you and even some bomberos from down the block in full gear came in to check it out.

Just as you run into Sonia Gonzalez and Tammi (House of Buggin still one of the better ways to waste time on youtube), it’s the living legend, colonizer of Planet Rock coming your way.

It’s the sure shot. The years pass, 30, 35 years since the burning of the Bronx and its pyrrhic victory: hiphop, we don’t stop, the salsa splattered on it, too, the survival of a Nuyorican idea that was more than just Nuyorican, the celebration of one of the last remaining reality zones en Nueva York. We were all witnesses to reality setting in. We don’t know what the reality is yet, but for a couple of hours it seemed like those Bronx is Burning flames were imaginary, and everyone escaped unscathed, and there would be people living the dream on this corner for as long as the sun stayed out in those long-ago summers when we became Nuyorican.