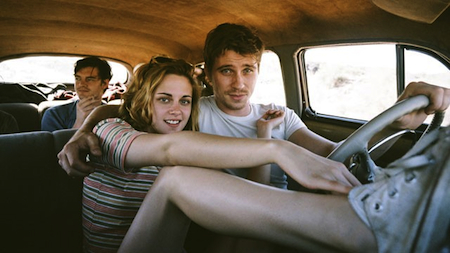 Early on in Walter Salles and José Rivera’s adaptation of the classic 1957 Jack Kerouac novel On the Road, the film’s narrator, Sal Paradise, makes clear what drives him on his search across America’s highways:

The only people for me are the mad ones, the ones who are mad to live, mad to talk, mad to be saved, desirous of everything at the same time, the ones who never yawn, or say a commonplace thing, but burn, burn, burn like fabulous yellow roman candles exploding across the stars.

Those mad ones were the nascent “beat” generation of the 1950s, the precursors of what later became known as the counterculture – alternative rockers, hip-hoppers, ravers, and hipsters.

But who were these mad ones, and what were they looking for? It may not be obvious up front, but sometimes they were African-American, or mixed-race, or Latino, and people of color often represented the part of America that wasn’t being overrun by the conservative social landscape of the 1950s that On the Road is a gut reaction against.

On the Road has been in the works since at least 1957, when Kerouac wrote a letter to Marlon Brando asking him to play the part of Sal Paradise’s road buddy, Dean Moriarty, in a film where Kerouac would play himself (Sal). After Francis Ford Coppola bought the rights in 1979, the project went through several iterations, with directors like Jean-Luc Goddard and Gus Van Sant proposed, and actors like Ethan Hawke and Brad Pitt attached.

The production that finally succeeded after so many failed was headed up by Brazilian director Walter Salles and Puerto Rican-born screenwriter/playwright José Rivera, whose collaboration on 2004’s The Motorcycle Diaries caught the eye of Coppola’s Zoetrope Studios after it screened at the Sundance Film Festival. Salles also brought in Argentine musician and producer Gustavo Santoalalla (Motorcycle Diaries, 21 Grams) to do the score and Lynn Fainchtein (Hecho en Mexico, Amores Perros), who is Mexican, as music supervisor. Still, this French/Brazilian financed production is more than just the flip side of Che Guevara’s road trip of self-discovery, made by Latinos on the outside looking in. On the Road, despite being ostensibly an ode to white male bohemia – and heavily banking on the presence of Zeitgeist-tabloid femme fatale Kristen Stewart – reveals the politics of race and sex that are always lurking in any true American story.

With a 21st century twist, Salles and Rivera decided to work mostly from the original version of Kerouac’s novel, a 120-foot scroll of teletype paper that the author submitted to publishers. “The scroll is sexier, more adventurous, more blunt,” said Rivera from a New York hotel room during one of the film’s recent press days. “The scene with Marylou [Kristen Stewart], Sal [Sam Riley] and Dean [Garrett Hedlund] in the car naked was not in the book because that couldn’t have passed censorship in 1957.” Explicit references to the flagrant bisexuality of Dean Moriarty – who in real life was countercultural gadfly Neal Cassady – and his affair with Carlo Marx, a/k/a famed beat poet Allen Ginsberg, are introduced early in the film but never alluded to in the novel.

“Dean greatly inspires a lot of people with this raw animal sexual magnetism that he had,” said Rivera. “This is 1948-49 when all these things happened, and society was just very sexually repressed, and you were a virgin on your wedding night and all those things, in a very conservative country. So when he sort of roars into town, he brings a sexuality that just seems startling to everyone around him.” And although K-Stew can seem a little too passive in the film, she has her feisty moments, and with other previously muted female characters, asserts her disgust with Dean Moriarty’s reckless mack daddy-ing.

But what about the Latino subtext?

The premise of the novel is a sense of alienation from mainstream America, as played out by two men who have suffered a loss of their fathers. Fueled by the intellectual atmosphere of Columbia University, where Sal Paradise and Carlo Marx study, and the peak of the jazz age in New York, they go on the road in search of meaning, a romantic attempt to escape the sterilization of encroaching suburban life and what the beats perceived as an emerging surveillance state.

Early on, Sal finds his first love (post-failed marriage) with Terry, a “sweet Mexican girl” played by Brazilian actress Alice Braga (City of God, I Am Legend). They take jobs picking cotton, a nightmarish task most often associated with African-Americans, but out West practiced by huge numbers of Mexican migrant workers (even briefly joined by Puerto Ricans at one point in the 1930s ). “One night the Okies went mad in the roadhouse and tied a man to a tree and beat him to a pulp with sticks,” wrote Kerouac in the novel about his time with Terry. “From then on I carried a big stick with me in the tent in case they got the idea we Mexicans were fouling up their trailer camp. They thought I was a Mexican, of course; and in a way I am.” 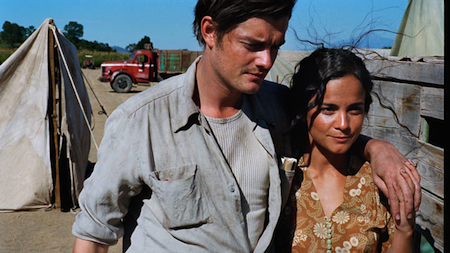 “This was part of Kerouac’s personal experience, attempting to live the life of the people [of color], and I never felt he was judging them,” said Rivera. “I felt he was living with them on their own terms and I like that.”

Keroauc also liked to think of himself as a “Negro,” a sentiment at the root of much of “beatness,” which refers to the almost-forgotten link between being bohemian and living on no money. He writes: “At lilac evening I walked with every muscle aching among the lights…in the Denver colored section, wishing I were a Negro, feeling that the best the white world had offered was not enough ecstasy for me, not enough life, joy, kicks, darkness, music, not enough night.”

The world of beat was firmly entrenched in the world of bebop jazz, a music that was famously gestated during a period when its main proponents, Charlie Parker and Dizzy Gillespie, worked with Afro-Cuban musicians like Mario Bauzá and Chano Pozo. When Sal Paradise and Dean Moriarty go out in San Francisco to see jazz, they go to see Slim Gaillard, a singer and pianist who embodies the multicultural roots of bebop jazz. By some accounts born in Detroit, he was rumored to have been born in and cut sugar cane in Cuba, and invented a nonsense “jive” language that symbolically represents the confusion of Anglophones when encountering Spanish.

In the end, after disappointing all the women in their lives, Sal and Dean head for Mexico, an action that would become a rite of passage for the nascent hipster counterculture. A 1957 article in Life magazine describing the hallucinogenic powers of psilocybin mushrooms would eventually bring flocks of hippies to Oaxaca, Mexico to visit a curandera named María Sabina. Years before, William Burroughs, whose character in On the Road is called Bull Lee, played by Viggo Morgenstern, had visited the Amazon rainforest to sample the hallucinogenic plant yagé and wrote Allen Ginsberg several letters about it, eventually published as The Yage Letters.

“When they go to Mexico towards the end, I told Walter [Salles, the director] that I didn’t want to write that part of the screenplay,” said Rivera. “I thought they were acting like entitled, white, almost college-aged kids coming down to the Third World to sleep with 15-year-old prostitutes and get drunk and get high. And I thought, ‘Wow this is where all this enlightenment leads to, just this kind of like sexual colonialism?’ But Walter was very clear, he said ‘You know, we really need to show them at their best and their worst, and we can’t whitewash what their truth was.’ And I said, ‘Yes, you’re right.’ And that’s what we did.”

In the film’s climactic montage/dream sequence, Sal suffers for days in a bed, feverish with dysentery. Various characters in the film flash over his head like the Tin Man and Cowardly Lion float over Dorothy when she lands back in Kansas. Bull Lee glowers at Sal, admonishing him, “You’re white!”

“I liked that line, but I didn’t write it,” said Rivera. “It was improvised by Viggo, he came up with it…it was really intense. But it points to the limitation of the white Negro idea – isn’t the whole counterculture just an outgrowth of this, forgetting the original racially charged roots of the lifestyle until they are almost entirely unrecognizable?”

Perhaps, but Kerouac – in the published novel at least – seemed to acknowledge that, in a way that some might find condescending, but others compassionate, Mexicans were free in a way he wanted to be, in a way Americans weren’t.

…they knew this when we passed, ostensibly self-important moneybag Americans on a lark in their land; they knew who was the father and who was the son of antique life on earth…all Mexico was one vast Bohemian camp.