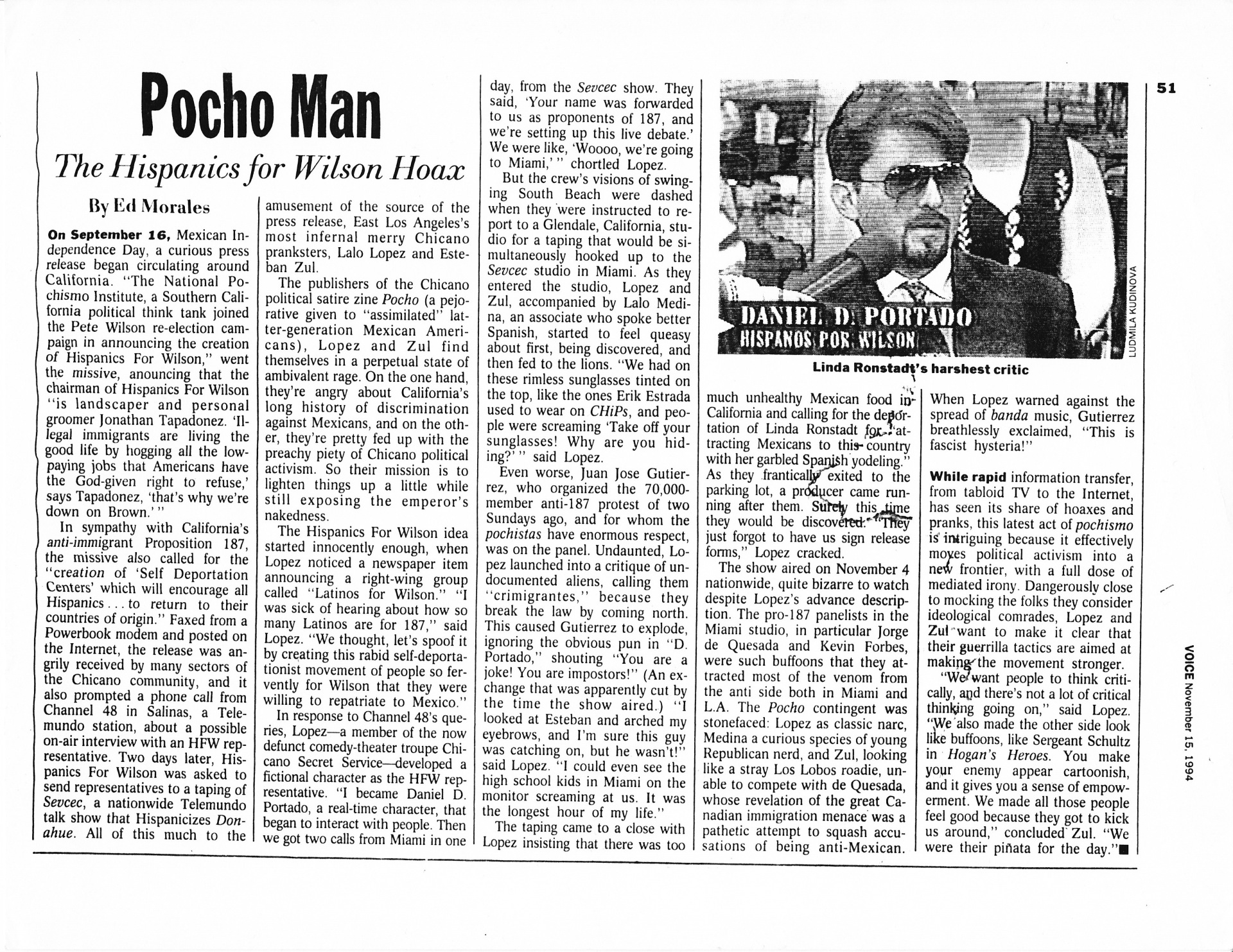 Just wanted to congratulate Rachel Maddow and The New York Times for figuring out that Lalo Alcaraz invented the idea of self-deportation, which was somehow conveniently picked up on during recent Republican debates. My reaction when I first heard the phrase was similar to what Lalo has been quoted as saying–it was a surreal journey back in time to the days of Pete Wilson and Prop 187 laid the groundwork for today’s mind-numbing anti-immigrant hysteria. But I figured that somehow the Republicans had happened upon this idea on their own, and had no idea that former California governor Pete Wilson actually used the phrase in an interview, and that Lalo would eventually jolt the media into researching his Pocho-prankster history. Which it looks like he did.

Full disclosure here–I met Lalo in 1992 at a theater festival in San Antonio where I was still trying to figure out the difference between Tejanos and Chicanos. He is one of several brilliant and funny Pochicanos (Culture Clash, Ruben Martinez, Mandalit Del Barco, Luis Valdez, Cherrie Moraga, Marisela Norte, Michelle Serros) who taught me most of what I know about L.A. and greater Califas. This is why, in 1994, he sent me that infamous press release that helped convince the TV editor at the Voice to go with the story you see pictured above. Lalo was really excited because he was about to appear–in character as Daniel D. Portado–on Sevcec, a Donahue-like talk show that ruled Telemundo’s airwaves in those days. I wound up recording the show on my VCR and it became the basis for the piece, which you can read here.

A couple of things about all of this confused me, however, and I’m feeling a little like I did when the J-Lo Fiat story came out. The first is probably a mistake Maddow made when she was congratulating her friends on the This American Life radio show. She says that the interview with Alcaraz was done in 1996, which would be two years after the matter came up, and also two years after my story. So either I scooped This American Life by two years, or Maddow was just confused by the fact that she had just referenced a David Sedaris piece that appeared on This American Life in 1996. My story ran on November 15, 1994, which is six days before the op ed by Safire mentioning Wilson’s use of the phrase “self-deportation” ran in the Times. [Note: I don’t think the fact that the late Safire and I went to the same high school has anything to do with this. I mean, so did Stokely Carmichael.]

The other thing is, check out the photo that appears in my piece above and the one in the Lede yesterday.  They look kind of similar, don’t they? The one in my piece was taken by someone who worked in the Voice art department after I gave them a copy of the videotape I made of Lalo’s appearance on Sevcec. It’s so powerful, though. Nothing like the steely horizontal lines of standard definition television reproduced on crisp newsprint. Makes me want to go look at some galleys right now!

So media kids, here’s a suggestion for a follow-up on this story: Explain what “pocho” means and why Lalo branded himself that way. Hint: it has to do with the fact that most Latinos in the U.S. are fully fluent in English. There’s some irony for you.

Anyway shout-out and much respect to Lalo, Esteban and all my pocho peoples.