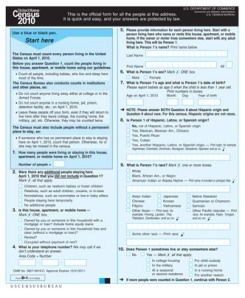 It’s census time and once again we’re invited to debate whether Hispanic/Latino/a/s in fact constitute a “race.” On the surface, the idea seems absurd. Hispanic/Latino/a/s are not a race, in fact, we symbolize the potential end to racial categorization because we have a cultural identity that assumes a multiracial genetic makeup. Still, we have a long history of being “racial-ized,” from the spectacle of Desi Arnaz spic-ing English to Tom Tancredo’s complaint just last February that because there were no “literacy tests” at the polling place, “people who could not even spell the word vote, or say it in English, put a committed socialist ideologue in the White House…”

A recent article in Time magazine written by the husband of a Venezuelan woman perhaps correctly asserts that the black-white racial binary imposed on Hispanic/Latino/a/s is “offensive.”  It argues that, following down that slippery slope paved by José Luis Vasconcelos, Hispanic/Latino/a/s constitute a “race.” In this view, mi raza es tu raza, as long as you prefer mestizo to mulatto. It says that because Mexicans make up 2/3 of Hispanic/Latino/a/s in the U.S., “Washington needs to rethink its definition of race.”

I’m the first person to agree with the idea that “America” continues to fail to understand “how layered the Latino self-identity is.” Mine is so layered that I don’t think that I’m the same person I was when I woke up this morning. Still, all that layering doesn’t obscure the essence of me.

No, I’m not about to essentialize about this. That would be antithetical to my identity as a Hispanic/Latino/a. It’s just that indulging in politicking about mestizaje as the medium for a revolution led by entrepreneurs leveraging social media and celebrities might be counterproductive. “Mestizaje” has not matured enough as an idea in this country to be much more than a lifestyle choice or marketing campaign.

I wonder why the black-white binary choice is so offensive for Hispanic/Latino/a/s. Certainly it’s never been less cool to be “white,” whatever that is. I’m not sure what the point is for holding out for those 2 or 3 chromosomes that might link me to a Saxony tribe or enjoy opera occasionally.

Tainos, that’s another story. I love all those guys. But they are a distant memory.

I’m a proud Puerto Rican, but move over, Ricky Martin. I’m coming out of the closet.